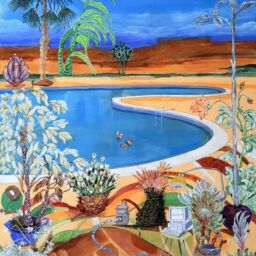 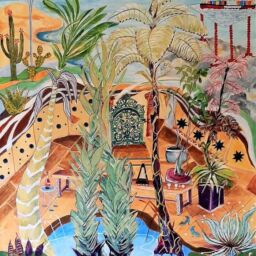 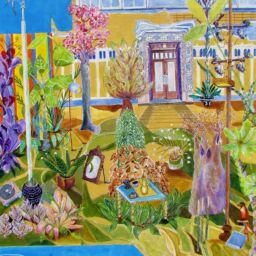 Alison Keenan lived in Myanmar before returning home to England to complete her art education and later lived in Italy and Egypt where she studied Aubusson and Gobelin Tapestry. In 2008, she graduated from Emily Carr University Canada and in 2010, she received a Certificate in Liberal Arts from Simon Fraser University. Her portfolio includes national and international exhibitions, awards and murals, an online catalogue, guest speaker, artist’s residences, and videos. She has recently completed a commissioned 22ft.wide mural in Yaletown, Vancouver, Canada.

Keenan’s practice currently utilizes the notion of a new era beginning in February 2020, when the virus was identified as Covid 19 and later became a pandemic. Her new painting series, beginning with Photosythesis, would not refer to Covid-19 images or be understood as oppressive in any way. Noting that as the skies began to clear, and the world began to breathe again, a surreal landscape emerged. Psychologically influenced by isolation her practice reflects a yearning to escape the changed world while suspended in the process.

In many of the works that are seen in her Photosynthesis series, the isolation, it is in there, but not in an illustrative or didactic way. There is extraordinarily little that talks about the virus in that way. And that was not necessarily a choice—it was very much what she felt and what she discovered. While painting is her primary focus, the pandemic gave her an unexpected gift of time. Time in the art studio to challenge and experiment with ways to internalize all this uncertainty beginning with the collage Everything is going to be Alright .