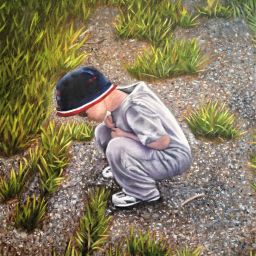 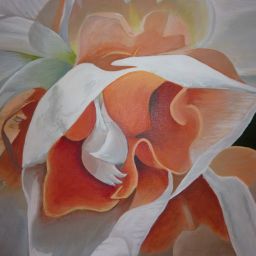 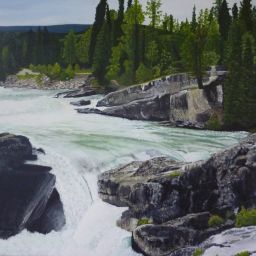 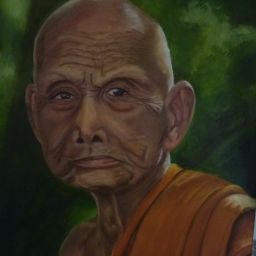 “I love to explore intimacy in my painting, the action of a woman at work unaware of being observed, a child at play, or the soft petals of a flower. Each new space offers a new shape, a new idea, a new palette, a new painting. I am drawn to beauty and perfection. I paint because my art restores me. I paint because it challenges me.”

Anna was born in small town central Saskatchewan and spent her childhood surrounded by nature. She loves to spend time outdoors. She has had a natural, lifelong curiosity about the human condition and finds the circular nature of mankind endlessly interesting and imperfect. Much of her inspiration to paint comes from observing people interacting with their natural environment. She paints in both acrylics and oils.

Anna developed an interest in art largely due to her son who was born with Down’s Syndrome. He was born with a congenital heart and lung condition which was inoperable, and which inevitably resulted in loss of exercise tolerance and ultimately a wheel chair. He attended art and drama classes at the University of Calgary. Anna enrolled in a drawing class with him. He spent many hours drawing creatures with wings and dragons.

After his death, Anna enrolled at the University of Calgary and received a BA in Sociology. Her electives while at university included Art History. For a short time Anna worked in research, while her desire to paint continued to nag at her. One afternoon she walked into the Ruberto Ostberg Gallery and met Anna Ostberg, owner of Ruberto Ostberg Gallery in Calgary. Anna Ostberg invited her to paint in her studio and taught her the basics of painting and colour theory. Since then she has attended art classes at Alberta College of Art, University of Saskatchewan Kenderdine Campus in Northern Saskatchewan, Emily Carr in Vancouver, as well as various weekend workshops with experienced, notable artists.

Anna has exhibited her work in one private showing in Calgary as well in group and juried exhibitions in the Calgary area. After moving to Vancouver 5 years ago, she has shown at the Great Blue Heron Nature Reserve near Chilliwack, the FCA Gallery on Granville Island and at the Richmond Art Gallery juried show. She is a member of the Federation of Canadian Artists and the Richmond Arts Coalition.